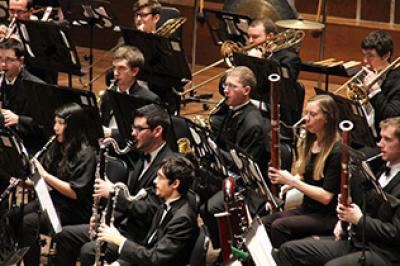 Conducted by Professor Russel C. Mikkelson, The Ohio State University Wind Symphony is widely recognized as one of the country's elite wind bands. Its membership comprises the most accomplished brass, woodwind and percussion players in the School of Music. Committed to the creation of new music for winds, this ensemble regularly commissions and premieres music for the medium. Current and recently commissioned composers include Pulitzer Prize winners Julia Wolfe, Wynton Marsalis, William Bolcom, and Aaron Jay Kernis, as well as esteemed composers Robert Beaser, Zhou Tian, John Mackey and many others.

What the reviewers are saying:

"...the music is very strong and tightly played by this expert wind ensemble. By turns splashy and reflectively still, this is an outstanding wind symphony disc. Naxos' Southern Harmony: Music for Wind Band is a solid effort on every front; a great band, outstanding, fresh literature, and a fine recording -- made at OSU's Weigel Auditorium -- that delivers all of the music up close and personal." — All Music Guide

“(I played in a good band), but we never came within a continent of the Ohio State University Wind Symphony, who under director Russel C. Mikkelson give us some superlative performances of 20th and 21st century works on Network (Naxos 8.573446). They not only sound great, they have chosen a program that keeps you energized and interested.” — Gapplegate Music Review

"Sound is superb and quite vivid. The performances are stellar in keeping with OSU's outstanding musical tradition. It's hard to believe that this is only a college ensemble. VERY HIGHLY RECOMMENDED!!!" — Joseph Kline, classical music reviewer

Please refer to the Class Schedule to confirm course meeting times and locations. 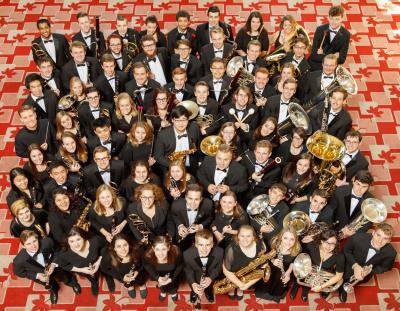 Conducted by Professor Scott A. Jones, the Symphonic Band is a vibrant community of musicians dedicated to both exceptional artistry and the exploration of the human condition through music. The ensemble has earned praise following performances for the College Band Directors National Association, the Ohio Music Education Association, the Midwest International Band and Orchestra Clinic, the Ohio State Contemporary Music Festival, on tour, and through its recordings.

The Symphonic Band is comprised of approximately 65 instrumentalists, most of whom are undergraduate and graduate music majors. A registered student organization at Ohio State, the ensemble is led by a Student Board elected from the membership of the ensemble. Membership is open through auditions to all university students regardless of major.

Collaboration and partnership are central to the mission of the Ohio State Symphonic Band. A 2019 residency with composer James Stephenson and his composition “there are no words” served as a catalyst for a meaningful collaboration with the Ohio State Office of Diversity and Inclusion and the producers of the documentary Emanuel. Other recent collaborations include the Ohio State Department of Dance and the Institute for Japanese Studies.

Collegiate Winds is an ensemble of approximately 60 musicians, both music majors and non-majors, who join together to perform four concerts per year, in addition to an appearance on the annual Music Celebration concert in December.

This ensemble is dedicated to broadening the artistic level and interest of its members while performing music of artistic and historical significance. Students have the opportunity to interact with important composers including recent guests Steven Bryant, John Mackey, Carter Pann and Michael Daugherty. Dr. David Hedgecoth, conductor.

University Band is designed for the non-major who wishes to include music among their campus activities but with limited time commitment or performance demands. The enthusiasm of the band enables its members to achieve excellent musical results while taking a brief break from studies in their major disciplines. The University Band performs four concerts per year, and is conducted by graduate associates.

The Ohio State University Marching Band consists of 228 brass and percussion instrumentalists who must try out every year. The Marching Band meets during the autumn semester (beginning in August, prior to the start of classes), and it performs at all home football games, select away games, post-season games and other athletic and community events. Learn more about the tryout process for the Marching Band. 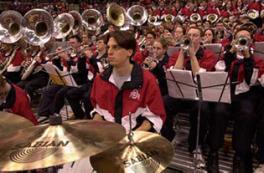 The athletic bands offer students the opportunity to perform both in concert and at athletic events, including men’s and women’s basketball, hockey, wrestling and the spring football game in Ohio Stadium. A large quantity of pop music is performed.

Instrumentation includes brass, woodwinds and percussion for these open-enrollment ensembles. Selected band members participate in trips, including post-season tournament play. These bands are composed of students representing almost every college in the university.